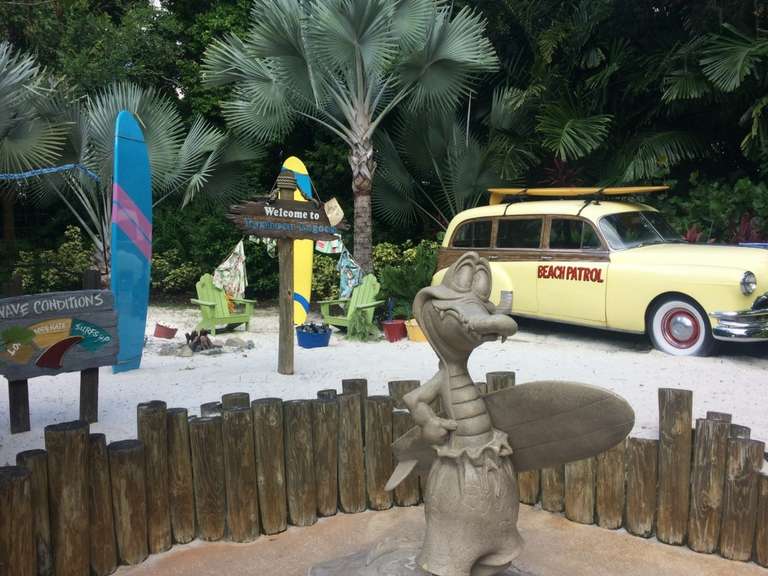 Which Disney World Water Park is Right For You?

Welcome back! If you enjoy this post, please consider giving it a share and letting me know in the comments! Also...in case we are not already virtual buddies, I would LOVE for you to follow me on Pinterest, Twitter, Insta or Facebook!P.S. This post may contain affiliate links, which helps me run FlipFlopWeekend. I appreciate all of your support! 10% of all affiliate income is donated to charity. Check out my full disclosure here.

Everyone knows and loves Disney’s Four Major Theme Parks. However, they oftentimes forget about the two other super cool Disney World water parks, which should not be overlooked;  Typhoon Lagoon and Blizzard Beach!

Though you won’t get extensive character greetings or fancy schmancy dining options (but you can get ice cream in a bucket), Typhoon Lagoon and Blizzard Beach provide probably more R&R than any other of the Disney destinations.

Mr. L was a WDW lifeguard at both Disney Water Parks for a couple of summers.

Countless times, he hears families say they wish they had scheduled more time to enjoy the water parks, especially during the hot summer months here in Florida when you just need to beat the heat.

I have a little bit of insider knowledge, as my husband has been a Disney lifeguard for the past three summers. He has worked at Blizzard Beach for two of those summers, and spent this past summer at Typhoon Lagoon.

We have been to both parks several times with our children, ages five and three. My husband gets in free, and using his employee discount, we opted for the Disney Water Parks After 2 Pass. Even without a discount, Florida residents can get this pass for just slightly more than the cost of a single day ticket. I highly recommend.

But, we know that most people have to choose. So, which one of these aquatic nirvanas that ooze Disney happiness is right for you? 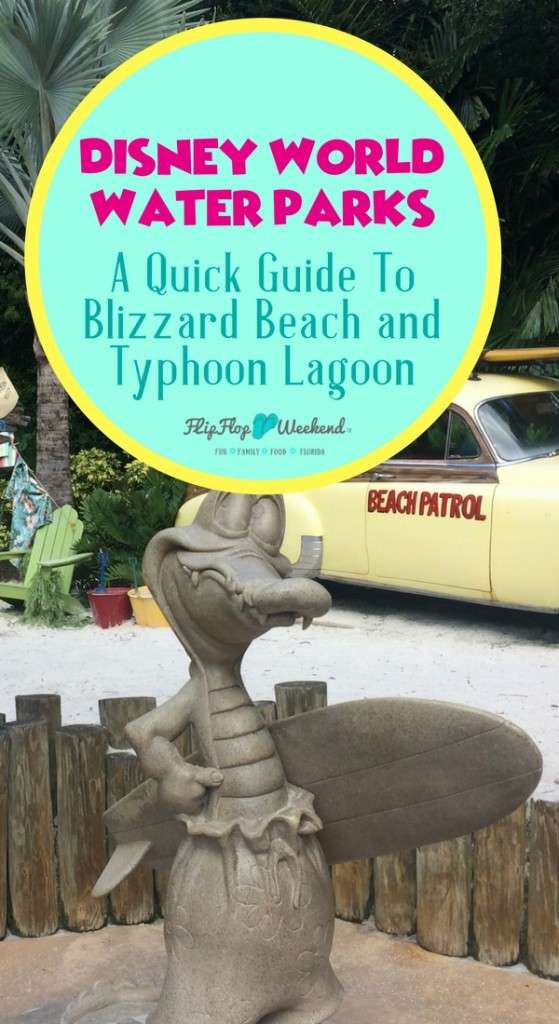 If you have toddlers, like us, Blizzard Beach, modeled after a ski resort ( with a super cute backstory) comes out slightly on top.

Their Tikes Peak area is specifically designed for toddlers and includes several small slides, splash pads and play areas for the youngest Disney travelers to cool off.

It is guarded by multiple lifeguards and slide attendants, which gave me ease as this was the first park that our fearless Jessie experienced water slides.

BB  also has games and activities themed around Frozen, which our little Elsa obsessed princess adores.

For those families with both younger and older children, Blizzard Beach still has plenty to offer.

Their family ride, Teamboat Springs, is suitable for all ages so everyone can ride together. For kids too big for Tikes Peak, yet not quite ready for the big time, Blizzard Beach has a secondary ‘kid’s area’ called Ski Patrol, which includes a pretty cool ropes course that I foresee Jessie going crazy for in just a couple of years.

And for the teenage or adult thrill seekers, Blizzard Beach is home to Summit Plummet, one of the tallest and fastest body slides in the world (Which I have never experienced…)

But What About Typhoon Lagoon?

Modeled after a storm-damaged tropical island, this water park gets an A for theming. Lilo and Stitch are the park’s main characters, and they occasionally make an appearance. Aesthetically, we prefer TL. Since, I think even the fake snow at Blizzard Beach gives Mr. L nightmares, the sandy areas and palm trees of Typhoon Lagoon fit our vibe. (We did move to Florida for a reason…).

Typhoon Lagoon also has an impressive kid area called Ketchakiddee Creek (mad props to the Imagineer who coined that name.)  This kids area is similar to Tikes Peak with smaller versions of water slides and splash areas.  However, it was a little more expansive.  This makes it a bit more difficult to keep your eyes on two kids at the same time, as opposed to Blizzard Beach’s more self-contained area. I will say that there is only one entrance in and out of Ketchakiddee Creek, so there is little chance of escapees 🙂

The crowning glory of Typhoon Lagoon is its 6ft wave pool that crests every ninety seconds. It is the largest wave pool in North America and really something worth experiencing. Typhoon Lagoon even offers surf lessons prior to the park opening at the pool ( advance reservations are required).

So does it matter which one I choose?

You can have a great day at either park and there really isn’t a wrong choice. In fact, if you are really indecisive, Disney now will allow you to skip between the two with one ticket. However, you will easily fill a full day at one of the parks. Plus, you may not want to deal with transportation while wet.

I will say that if you have super young kids, Blizzard Beach will be a better experience. Their kiddie area offered more that my kiddos enjoyed, and I wasn’t stressed about not being able to keep my eyes on both of them while Mr. L dared Summit Plummit.  Plus, if your family spans toddler, child, tween to adult—Blizzard Beach has enough options for all age ranges.

In my opinion, Typhoon Lagoon is best geared towards older children who can swim up through adults. This is mostly due to the Wave Pool and variety of larger slides.  It is our water park of choice when Mr. L and I go on the rare occasion that we can visit sans kids.

Either way, if you read nothing else in this post, read this: plan a day to visit one of the Disney Water Parks. You can get Disney discount tickets from Undercover Tourist and then hit a park to lounge in one of the many chairs or float around the lazy rivers. It will be a much-needed reprieve from pounding the hot pavement at the parks. I promise!

Have you been to a Disney World Water Park? Which One is Your Favorite? Let me know in the comments! 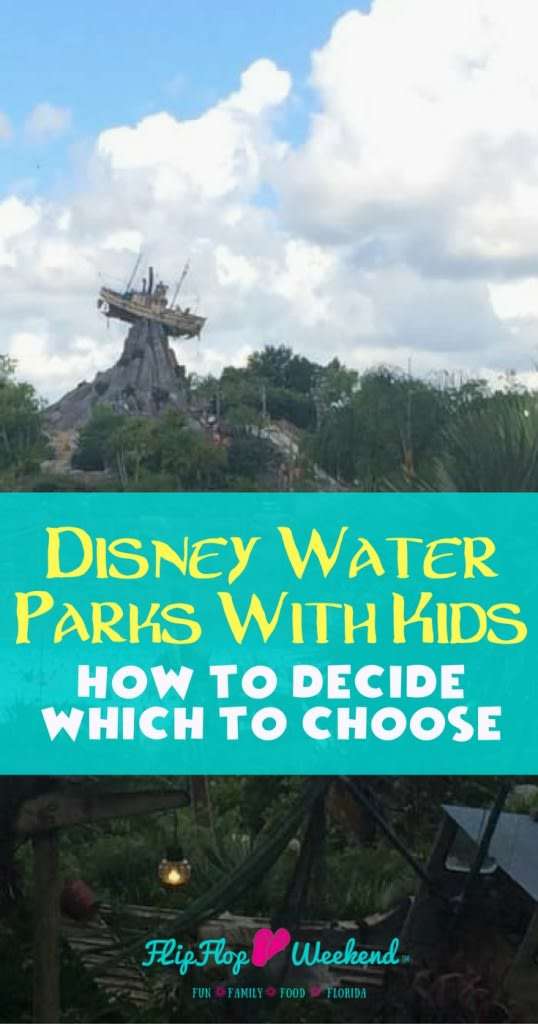 Keri lives just outside of Orlando, Florida with her husband and two kids. By day, she is a school counselor and on the weekends, she is usually exploring Disney World and Central Florida. Travel is a passion for her and her husband, also an educator. They try to take at least one large international trip yearly, as well as several smaller domestic getaways and have learned to do it well on teacher salaries. FlipFlopWeekend was created to share how you can also travel on a budget, regardless of whether your dream destination is Disney World or around the world... 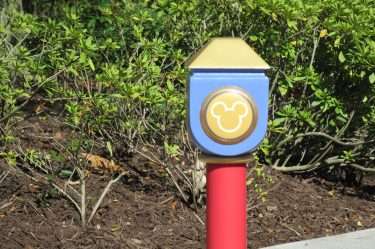 A Complete Guide To The Disney World Fast Pass System 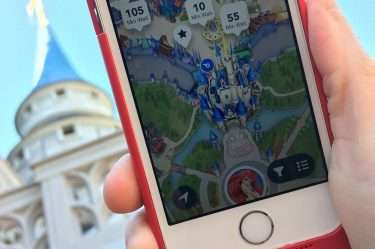 The Beginner’s Guide To Getting Started On My Disney Experience 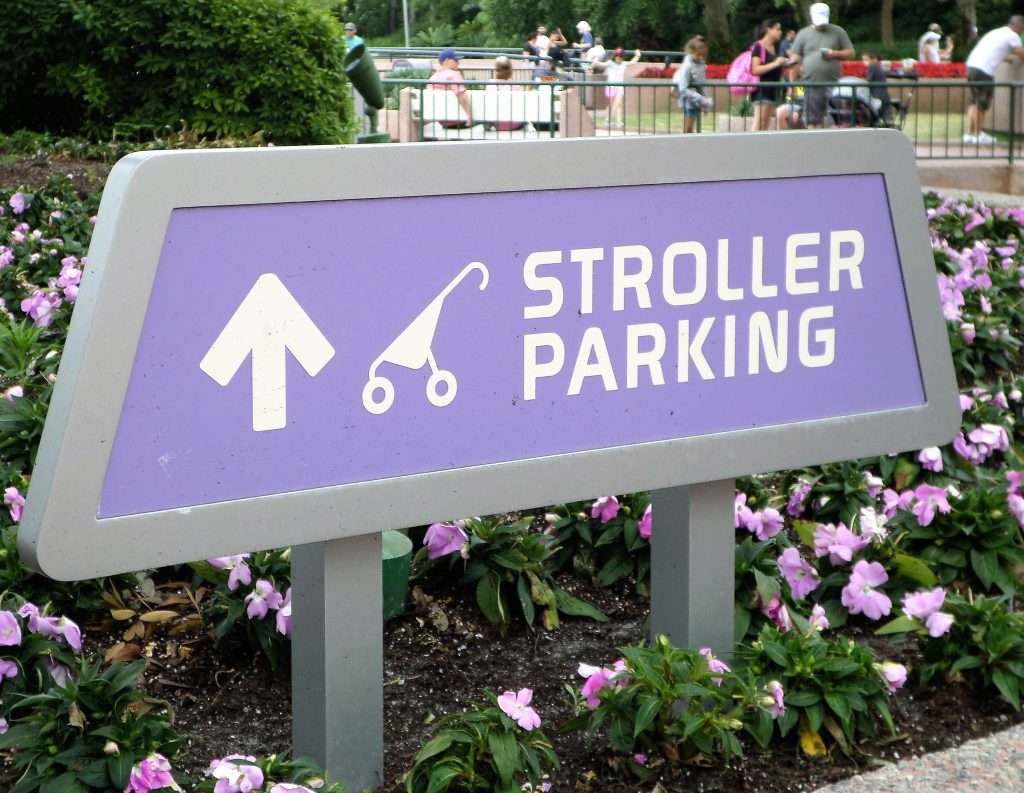 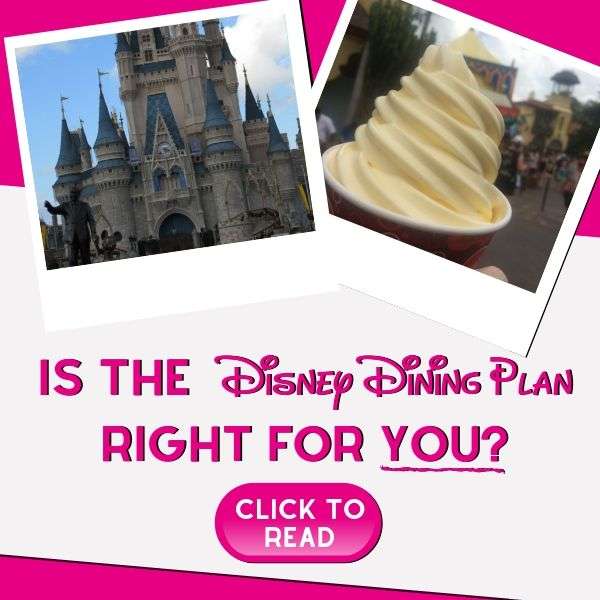 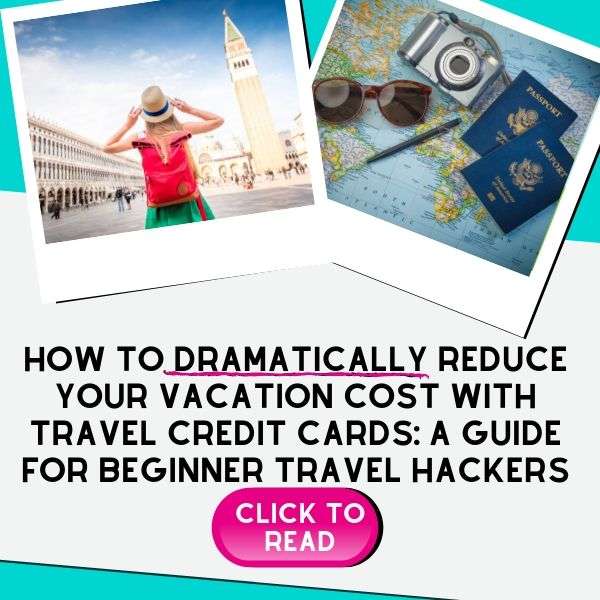 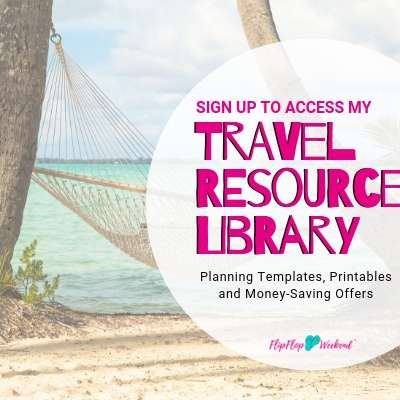 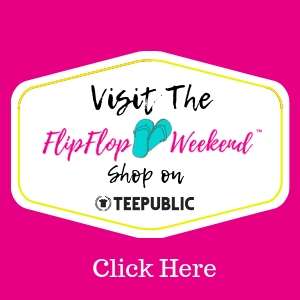 Where am I From?

Where am I Going?

You can find out more about which cookies we are using or switch them off in settings.

This website uses cookies so that we can provide you with the best user experience possible. Cookie information is stored in your browser and performs functions such as recognising you when you return to our website and helping our team to understand which sections of the website you find most interesting and useful.

Strictly Necessary Cookie should be enabled at all times so that we can save your preferences for cookie settings.

If you disable this cookie, we will not be able to save your preferences. This means that every time you visit this website you will need to enable or disable cookies again.